A response from Health Care Complaints Commissioner Sue Dawson herself.

A contribution put together with one of our readers.

I had been referred to Dr Kerrie Meades, Ophthalmologist, for help with the double vision I was experiencing – it had developed to the point where I was a danger to myself and others on the road when driving a car, I could have had a bad accident and nearly did.

So I spent 3 or 4 hours in Meades’ rooms, seeing her, one of her colleagues, and various others, at a cost of 3 or 400 dollars – only to learn nothing. All that happened is that I kept being told that double vision could have serious causes which required extensive investigation, investigations that went on and on and on.

Eventually, I gave up on her and her people, and, some months later, I saw another Ophthalmologist, who in a consultation that cost less than $140, solved all my problems in 5 minutes, quite literally.

Firstly, after briefly reviewing the history of my double vision, he told me that it was incredibly unlikely that it was due to anything serious, but that, if I wanted to make sure, I could have an MRI of my brain, which I did, and it was clear. And secondly, that to solve the practical problems of my double vision I could have my Optician put prisms in my glasses, costing virtually nothing, and when I did this, it was like a miracle, it was as though I no longer had double vision. Meades and her people should have mentioned this in the first five minutes, of course, but hadn’t, in 3 or 4 hours.

I was particularly bitter about the fact that I’d spent a number of extra months in which, as I’ve said, I was a danger to my self and others when driving a car and could have had a bad accident and nearly did.

So, although I’d had had experiences in the past in which I’d found the NSW Health Care Complaints Commission to be completely and utterly useless, I decided to make complaint about Meades to them, thinking that, this time, at least, I wouldn’t be told that I had no basis to complain.

But the response to my initial complaint was that, although I’d wasted 3 or 4 hours and 3 or 4 hundred dollars, I DID have no basis to complain – and, in effect, that the fact that I’d had such a different experience with another Ophthalmologist wasn’t relevant. And, in response to my request for a review, I got the letter shown below from Commissioner Sue Dawson herself.

In brief I was told that, “Two doctors having different opinions and action plans about a patient does not necessarily mean that either practioner’s conduct is unreasonable.”

Of course, in the real world, authors of such rubbish wouldn’t last 5 minutes in their jobs. But not in the Berejiklian Government’s world!!! – they just don’t care. They’ve even just recently granted Dawson another five year term!!! 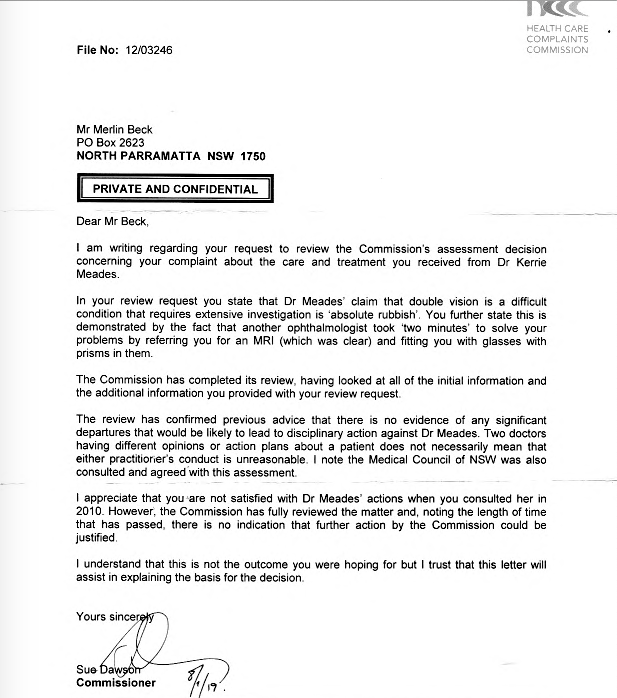 Email us at info@questionsmisc.info.