“A number of years ago I was referred to Dr Kerrie Meades, Ophthalmologist, for help with the double vision I was experiencing – it was becoming worse, I was becoming a danger to myself and others when driving a car, I could have had a bad accident, and nearly did.

So I spent 3 or 4 hours in Dr Meades rooms, at a cost of several hundred dollars, seeing Dr Meades and her people – from which I learnt nothing!

As I was to learn afterwards, from another Ophthalmologist, there’s a solution to double vision which is extremely simple, extremely effective, and costs almost nothing – having prisms in your glasses. When I eventually got prisms in my glasses, it was as though a miracle had occurred, it was as if I no longer had double vision, it was as if I was back in my 40s and 50s again.

But in the whole time I was in her rooms, neither Dr Meades nor any of her people mentioned prisms in your glasses!!!

Also, the reason I persisted with Meades and her people for 3 or 4 hours, was that I kept being told that double vision could have “extremely serious causes,” which required “extensive investigation.”

As I was to learn afterwards, from this other Ophthalmologist, it was extremely unlikely that my double vision was being caused by anything serious, but to make sure, I could have an MRI of my brain, which I did, and it was clear.

So why didn’t Meades and/or any of her people tell me about getting prisms in your glasses and and having MRIs of your brain? It would seem obvious it was so they could get several hundred dollars in fees from me, and they they didn’t care a damn that, in the meantime, for want of this information, I might have a serious accident driving my car.

Naturally, I would have thought, I felt that, on the basis of the above, I had a good basis to lodge a complaint with your Health Care Complaints Commission, which I did. But no, after my complaint was considered and then reviewed, I got the letter shown below from you, yourself. 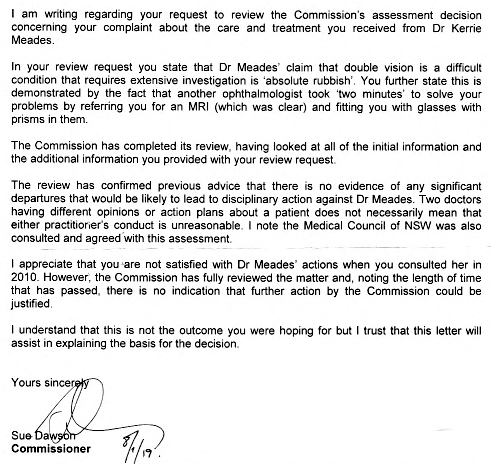 That was how it was back in 2019. I’m wondering, whether, if, in similar circumstances, I lodged the same complaint with your HCCC in 2002, whether the outcome would be any different? I fear not.

Looking forward to hearing from you.”

We’ll let you know if we get a response.