The Committee on the Health Care Complaints Commission in action 1

More or less since it was established, in June, 2019, we have been aware of the existence of a committee called the Committee on the Health Care Complaints Commission, made up of  Members of the Parliament of New South Wales.

This is what’s said about it. 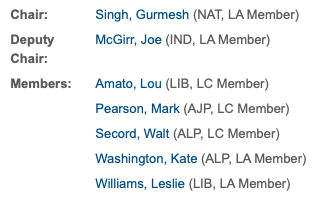 We’ve been flabbergasted to learn, only today, that Ms Sue Dawson, who had been the HCCC’s CEO since December, 2015, was, in October, 2020, granted a further 5 year term, when her track record was/is so atrocious, to put it mildly – and you would think that this committee would have had a significant hand in this, in which case, we’d think, they’ve lost all credibility!!! Surely there would have been others that could have been appointed that had better credentials than Ms Dawson’s.