To us the way in which the NSW Health Care Complaints Commission is run, under Ms Sue Dawson, the Commissioner, (the “boss”) is nothing short of farcical, as illustrated by things such as this.

If you click on this link, you are taken to one of the NSW Health Care Complaints Commission’s Media Releases, dated 10 Mar. 2021, from which you will see that the complaint is that a Ms Breanna Ford, a 23 year old former nurse, (she’d already ceased being a nurse,) had “inappropriately taken two prescription pads and used them to forge eight prescriptions.” Heavy stuff, huh!

Well! Would you believe it? This complaint is given VIP treatment – SO many resources allocated to dealing with it! Amongst other things, a full hearing is had into it in the Civil and Administrative Tribunal New South Wales. 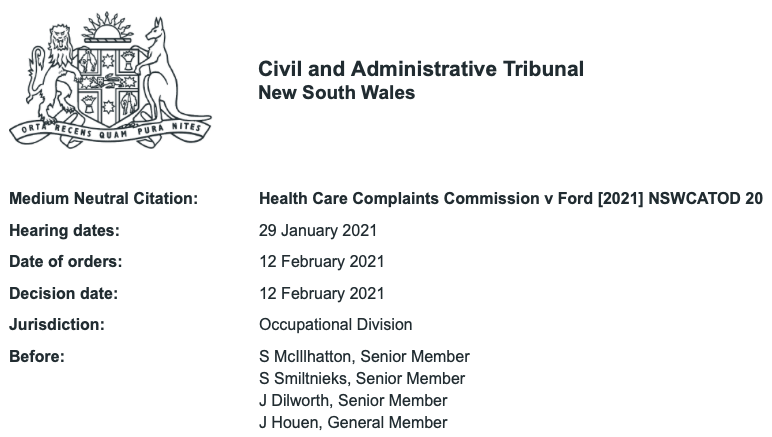 which is followed up with a report into it’s proceedings that has 68 items!!! and goes on for pages and pages – to view it, click on this link.

It would be interesting to know how much of the taxpayers money was paid to the four members, shown above, for their day’s work? – not that we, the people, will ever find out.

It seems that more and more things and areas are just a CIRCUS under the Berejiklian Government, perhaps because Premier Berejiklian doesn’t care, and so many people know she doesn’t care – nobody feels accountable, this when modern technology makes it so easy to make people more accountable, particularly if you’re a Premier!!!